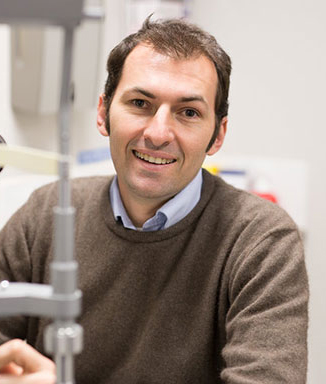 His major clinical interests are in general ophthalmology which includes both Adult and Paediatric Ophthalmology as well as Glaucoma, Cataract and Medical Retina.

During medical training he completed a degree investigating the outcomes of cataract surgery for people living in remote areas of the Northern Territory with Clinical Associate Professor Nitin Verma AM, and in 2001 he completed his undergraduate medical degree at the University of Tasmania. He obtained a PhD investigating the genetics of glaucoma through Flinders University of South Australia, under the supervision of Professors Jamie Craig and David Mackey.

He completed his Ophthalmology training at the Royal Victorian Eye and Ear Hospital in Melbourne. In 2012 he was the Novartis Fellow at the Lions Eye Institute in Perth and was awarded a WA Tall Poppy Award from the Australian Institute of Policy & Science. He was also awarded a Peter Doherty Biomedical Fellowship from the Australian National Health and Medical Research Council.

Professor Alex Hewitt has a major interest in translational research – scientific research that helps to make findings from basic science useful for practical applications that enhance human health and well-being.

He has been involved with work relating to the identification of genes and risk variants in glaucoma and myopia, as well as quantitative traits such as central corneal thickness, optic nerve size and the retinal microvascular circulation. This work has resulted in publications in leading journals such as Nature Genetics, Human Molecular Genetics, PLoS Genetics and Ophthalmology. To date he has co-authored over 100 peer-reviewed publications.

He has worked with major research projects including the Glaucoma Inheritance Study in Tasmania, the Norfolk Island Eye Study, the Twins Eye Study in Tasmania, the Australian and New Zealand Registry of Advanced Glaucoma. Professor Alex Hewitt is part of the International Glaucoma Genetics Consortium, and the global Consortium for Refractive Error and Myopia. Additionally, he has recently help establish independent research projects in China, Uganda, Nepal and Indonesia.